How Impex contributes to the green mission of Vencomatic

How Impex contributes to the green mission of Vencomatic

The future of global poultry farming? If you ask the Vencomatic Group, it’s sustainable and animal-friendly.

The Eersel-based family business is a global player when it comes to housing, egg handling, and climate control for poultry. To give you an impression: more than 75 million hens live in an environment that came from the drawing board in Brabant. And every hour, over one million hatching eggs pass through eggpacking machines of its subsidiary Prinzen.

However, the innovative Dutch manufacturer is not just about the big numbers, efficiency, and yield. An equally important question that occupies the 450 employees of the Vencomatic Group is how poultry farmers can produce with the lowest possible environmental impact and the highest level of animal welfare.

“We only have one planet and we want to protect it. At the same time, there’s a challenge to feed the world’s growing population. Eggs and chicken play an important role in this”, says Lotte van der Ven, CEO of the Vencomatic Group. “This drives us to always look for ways to use raw materials and energy more sparingly.”

A good example is the heat exchanger developed by the Vencomatic Group. It uses heat from the poultry house to heat fresh air from outside, without the two airflows coming into contact. This enables poultry farmers to achieve a healthy indoor climate with significantly lower CO2 emissions. The next innovation is just around the corner: The heat exchanger is now being further developed with new technology so that it also fulfills the function of an air scrubber and captures up to 90% of ammonia emissions.

The chicken is key

Also in the field of animal welfare, the Vencomatic Group is leading the way. For example, in 2004 the company developed a solution for on-farm hatching, the hatching of broilers on the farm. The chicks have direct access to water, feed, and fresh air, giving them a better, stress-free start. “We were the first to sit down with animal welfare organizations. The industry thought we were crazy,” remembers founder Cor van de Ven. “But we’ve always said: if you put the needs of the chicken first, you end up with the best results.”

For that reason, the Vencomatic Group also enjoys its cooperation with Impex, which supplies drinking water systems under private label to the Brabant-based company. “About 35 years ago, you had numerous manufacturers offering drinking water nipples. Most nipples were unreliable. The water flow wasn’t stable; they leaked. The systems of Impex were a positive exception then and they still are. A number of years ago, I visited the Impex factory in Germany and you can see why. I’ve seen with my own eyes that Impex invests in quality and innovation,” says Cor.

The bond between the two companies has always been warm over the years, with a healthy give and take relationship. “Impex already had a dealer structure in South America and Asia when we started exporting. We were allowed to tap into that,” says Cor. “I also remember once being stuck at the border in the United States. According to customs, I had some wrong stamps on my passport. Richard Wentzel was already in the country for a trade show. One phone call was enough and he came to help me!” 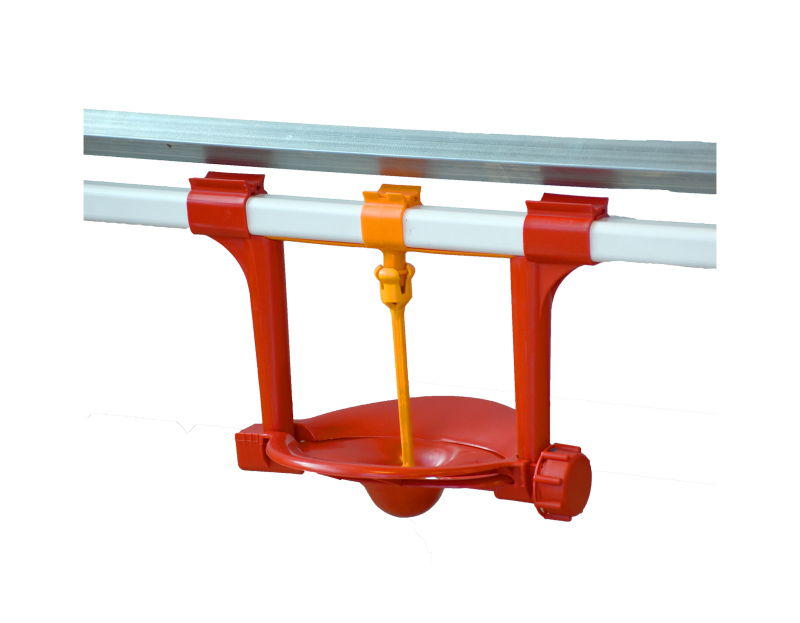 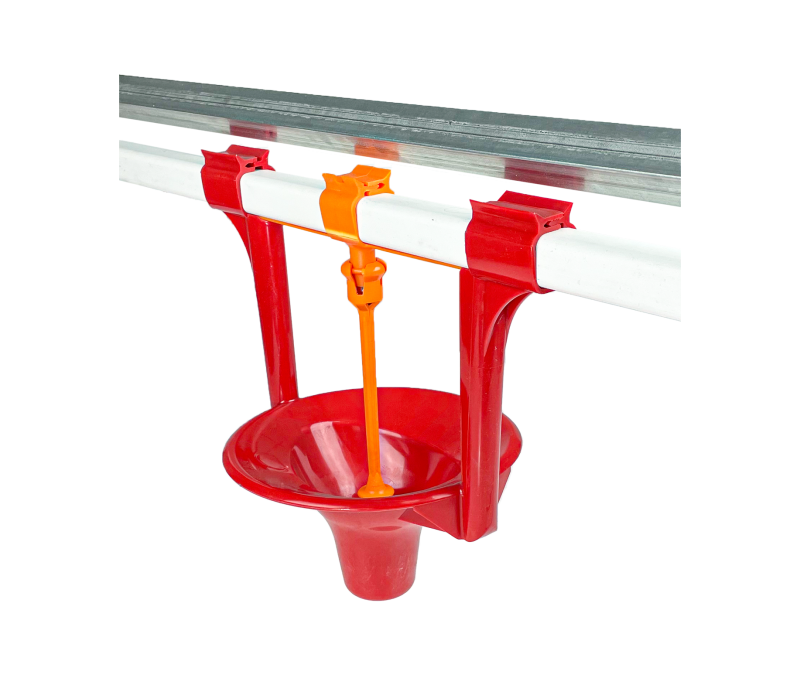 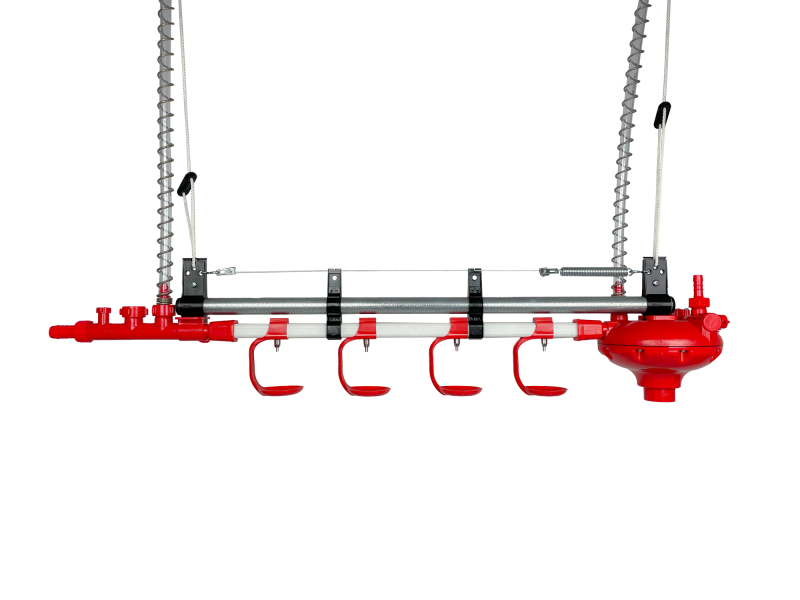 Videos
Automatic flushing: I-Flush flushing system The use of an automatic flushing system contributes to improving hygiene and thus the reduction of antibiotics.
Blog posts
How to reduce the risk of salmonella via drinking water Salmonella is a threat to the health and productivity of your poultry. But with careful drinking water management you reduce the risk of salmonella infections.
Guides
Which drinking nipple suits your poultry There are many different types of drinking nipples available, but what are the most important details that you should pay attention to? We'll discuss it in this guide.
Guides
Drinking water management guide for broilers In this guide we discuss the most important do's and don'ts when it comes to drinking water management and the maintenance of your drinking water system.
Guides
Drinking water management guide for layers In this guide we discuss all the do's and don'ts when it comes to maintaining your drinking water system and managing your laying hens so they can perform at their best.
Solutions
Four reasons to automatically flush drinking lines Clean, cool and fresh drinking water is crucial for your poultry. We give you four reasons why an automatic flushing system is the ideal solution.
Blog posts
This is what water usage says about the health of your poultry Do you want to know if your chickens are healthy and performing optimally? Checking the water usage is one of the easiest ways to monitor this.
Solutions
The benefits of a closed drinking water system Do you wish to increase the production results of your poultry and the hygiene in your poultry house? Discover all benefits of a closed drinking water system and find out what you need to pay attention to when buying such a system.
Solutions
Which drinking nipple is suitable for your poultry? Drinking nipples for poultry are available in many types and sizes. Discover which drinking nipples there are and which drinking nipple type is suitable for your poultry.
Videos
How it's made: Impex drinking nipples Have you ever wondered how a drinking nipple is made? Take a sneak peek behind the scenes at our state-of-the-art production facility in Germany!
Case studies
Impex delivers the quality VDL customers are accustomed to You’ll find them all over the world. Poultry houses equipped with the solutions of VDL Jansen and VDL Agrotech. For this, these leading Dutch manufacturers also count on the quality of Impex.
Blog posts
These are the 3 most common causes of water wastage Water wastage costs money and reduces your production results. By keeping these 3 points in mind, you can prevent the most common causes.
Case studies
Why Beek Poultry chooses drinkers with drinking nipples in the wintergarten The 40,000 laying hens of poultry farm 'Beek Pluimvee' always have access to clean, fresh drinking water in the wintergarten via Impex's TN380 automatic drinkers.
Infographics
Drinking water management: This is what a laying hen needs Do you know what the correct height of the drinking line needs to be for a laying hen or what the correct water pressure should be? Check this infographic!
Case studies
Data farmer Bart Janssen has 90% fewer footpad lesions Innovative, data-driven, always looking for improvement opportunities in the poultry house: Bart Janssen is a modern poultry farmer at heart. And so he also immersed himself in drinking water management.
Blog posts
8 simple tips to optimize poultry vaccination A drinking water system is the perfect tool to administer vaccines or other means to poultry. We give you 8 simple tips to optimize the vaccination of your poultry.
Case studies
Japfa: Quality from farm to plate Millions of people in Asia put a meal on the table every day with Japfa’s products. The leading agri-food multinational from Indonesia watches over the quality of its food products from farm to plate. And Impex also contributes to this.
Case studies
Theo Bos: My untrimmed laying hens waste less water Layer farmer Theo Bos (NL) sees the water usage of his untrimmed laying hens drop by as much as 0.1 ml per gram of feed in his new poultry house. Find out how!
Blog posts
This is how you reduce water wastage of untrimmed laying hens Untrimmed laying hens have more difficulty drinking from the drinking nipples. We give you 5 tips to reduce drinking problems and water wastage.
Blog posts
Drinking water management: This is what a broiler needs This infographic shows you the correct height of the drinking line, the correct water pressure, and everything else you need to know to optimize your broiler production
Blog posts
This is why you need to prevent biofilm build-up Biofilm is one of the most underestimated threats to poultry health. We are happy to explain what these threats are and how you can prevent the build-up of biofilm as much as possible.
Blog posts
How taste affects poultry water consumption Taste can influence water consumption of poultry more than you might think. We give you 3 tips so you know how to avoid problems with the drinking water consumption of your birds.